Probably one of the most difficult times in Nova’s and our lives – the big surgery on her hips.

Nova was born with dislocated hips, which is quite typical for people who are born with arthrogryposis. By “dislocated” I mean that the thigh bone hardly had any connection to the pelvis. That is why the articulating parts of the bones were not shaped correctly. Additionally the range of movement in her hips was very limited. She could for example not stretch her hips fully which means she could never stand straight. Many children get their hips corrected when they are about 6 months old, but due to a variety of reasons we decided to wait until Nova was 18 months old. So this whole procedure took place during fall 2014.

First Nova had to undergo an examination in the MRI in full anestesia. After that the doctors came to the conclusion that it would be helpful if Nova could spend 2 weeks prior to surgery in a  stretching bed. This would stretch her hips and the surrounding structures to the maximum. Which looked like this in reality: Novas legs got completely taped and equipped with a hook on the sole of her feet. Then she got hung up by her legs in a special bed, in a way so her bottom was kind of hovering a few centimeters above the mattress. 24/7, for 2 weeks. I was allowed to take her out for feeding her and changing diapers, but it was not possible to bathe her. The special bed was delivered home: 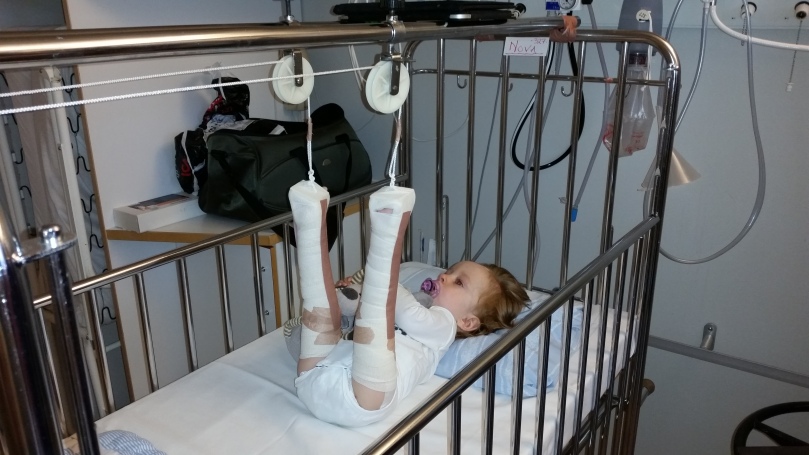 We spent two whole weeks isolated at home. The risk of catching an infection at kindergarten or job was too high, so Emil was home from daycare, Linus got payed care leave and I was still on maternity leave. It was an intense time, but brother Emil kept the spirits high:

Nova did not complain a single time, she endured it with her own stoic serenity. She actually got so used to it that she sometimes even was sleeping like this: 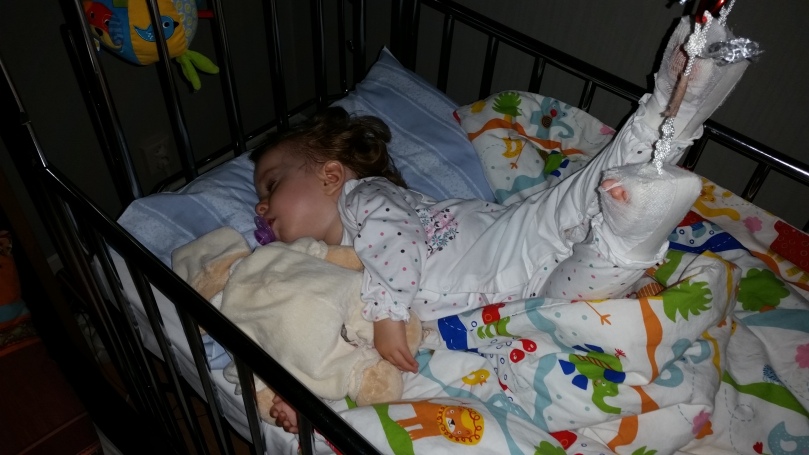 Two weeks later the surgery was performed. The fantastic orthopedic surgeon in our local pediatric hospital worked for a couple of hours cutting through several soft tissues, relocating the hips to where they belong and finally put her in a huge cast. 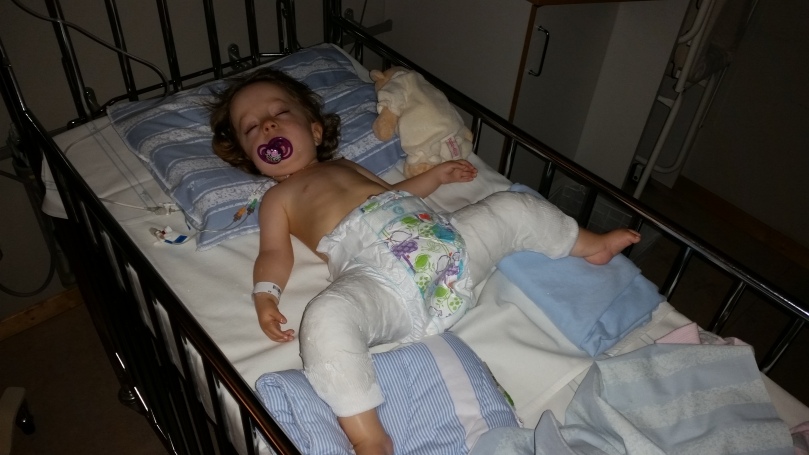 Nova had to have this cast for 6 weeks and I can claim that this was the time of being very creative and withstanding. Apart from the fact that it was impossible to keep up a certain level of hygiene, we also had to improvise a lot. That, for example, is how we had to transport her in the car (I have to add, that it is against the law to transport children under the age of 3 in a forward directed carseat in Sweden ):

This is, how Nova spent her days: either like on the top picture in an improvised seat or on a stack of pillows – the iPad always within her reach:

After 6 weeks the cast was removed. Nova had very spindly legs, all muscles in the pelvis area were rudimentary and she was in heavy pain for the first couple of days. The following two months, Nova had to wear this splint 24/7:

But not even that could keep her from pulling herself on the belly over the floor and hunting her beloved potato chips. Over and over again I was fascinated by her good mood and light-heartedness:

At least I could take of the splint for short periods of time and finally bathe her again. She loved and really enjoyed that!

Finally Nova had to wear this splint only at night times for three months. But that was of course no problem, Nova has always been sleeping very well since she was born. The whole treatment lasted for 7 months and it took some time after until Nova had really recovered, especially when it comes to muscle power and range of motion. In the long term the whole procedure was absolutely worth it, because without the surgery and the competent help of the team (particularly the surgeon and the physiotherapist) she would not be able to perform things like this today:

Last but not least this whole phase would have been much more difficult, if Linus had not been allowed to be at a 2,5 months long, payed care leave. It made the situation much easier, because it really took two people to keep up a somewhat normal daily life. The swedish public health care system makes this possible.

By that I want to finish with reports from Novas time as a newborn/toddler. Today we are in a completely different phase 😉